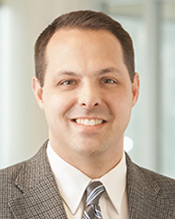 Dr. Medaris is originally from Jacksonville, Illinois, and grew up in the St. Louis, MO area. He obtained his undergraduate degree from the University of Missouri – Columbia in 1999 and graduated with a degree in medicine from the same university in 2003. Dr. Medaris completed his Otolaryngology residency at the University of Nebraska Medical Center in Omaha in 2008. Prior to joining Midwest Ear, Nose & Throat Clinic, P.C. (now Ear, Nose & Throat Consultants, LLC) in the summer of 2012, Dr. Medaris was on active duty in the United States Air Force and practiced Otolaryngology at Offutt Air Force Base. He is a member of the American Academy of Otolaryngology-Head & Neck Surgery and is a former chapter president of the Christian Medical & Dental Association. Furthermore, Dr. Medaris is active in the Omaha community. He has served as a deacon at Hope Community Church and aided them in developing their Iron Men Men’s Ministry as well as their early childhood ministry. Dr. Medaris also volunteers as a ringside physician for USA Amateur boxing. While Dr. Medaris performs a full realm of otolaryngology/head and neck surgeries such as thyroid surgery, salivary gland surgery, eardrum repair, sleep apnea surgery, and tonsillectomy surgery, he is particularly interested in functional endoscopic sinus surgery and minimally invasive procedures such as balloon sinuplasty to restore natural sinus drainage.